Off to London soon to help Darling daughter #1 with a house reno. She has been busy of late.
A clip from her latest directing project at a fun little boutique hotel  (all rooms have four poster beds) at Tower Bridge in London, Hotel Indigo.

A review from Frost magazine and comments from a guest post on trip advisor. Looked like fun.

Culture, Featured
by Catherine Balavage
Summer has finally hit London and if you are looking for something to do in London then the Hotel Undigo might have something for you.
Guests can be part of ‘The Hit’ immersive theatre at Hotel Indigo London Tower Hill

Hotel Indigo London Tower Hill is offering visitors the chance to become part of ‘The Hit’; an interactivetheatre experience inspired by the hotel’s location in the heart of London’s financial district.
Available exclusively for three nights from 25 – 27 May, the audience will be swept up in the story as the drama unfolds with an escapade centred on the hotel’s historic past as a prestigious bank.
The action will take place throughout various areas of the hotel where guests will be immersed in an incredible live performance. Guests will become part of the drama as it unfolds around the story of an historic heist, greed, deception and a lover’s tale.
Characters will entice the audience through the art of emotional storytelling as they subtly reveal details of the hotel’s past. The 50 minute performances will be available to guests and members of the public via www.facebook.com/hotelindigoeurope.
Alex Apostolakos, General Manager of Hotel Indigo London Tower Hill said, “Our interactive theatre experience brings to life Hotel Indigo London Tower Hill’s location and financial past in a really inspiring way. Guests are going to have a story to tell long after they’ve left the hotel and our original bank vault provides the perfect setting for the dramatic ending to our story ‘The Hit’.”
Mike Greenup vice president marketing Europe, IHG, said, “Every Hotel Indigo draws inspiration from its local area to give guests an individual experience. The immersive theatre performances are a great way to bring to life Hotel Indigo London Tower Hill’s local story. Last month saw the new Hotel Indigo Edinburgh open in Scotland and we plan to open a total of 11 new hotels in Europe in the next three to five years.
Hotel Indigo London Tower Hill is situated in the heart of London’s historic Square Mile with the city’s financial district on its doorstep. Many of the capital’s banks are located nearby, with the Thames just a short walk away along with St Paul’s Cathedral and the iconic Gherkin building.
Hotel Indigo offers guests the best of both worlds; with all the charm of a boutique hotel coupled with the trust of a bigger brand.


“Armed raid on the hotel!”

Reviewed 7 June 2012 NEW
This was a shock but the hotel had organised this. After going to our room on the 6th floor we were called to say we were to be upgraded. Believed this was because I was a gold card member but later found out its because the room next door was being used by the gang.
The Indigo hotels are trying to position themseves differently from other sin the IC group. The hotel had arranged for a theatre group to act out a production which required interaction by the audiance. The production was mainly in the downstar bar which was actually in the vaults of the bullion company that originally was on this site but also involved moving to other parts of the hotel. The fial scence involved an armed gang entering the 'vaults'. The actors were very professional and the production was extremely enjoyable.What a start to our holiday in London. We stayed on a Friday and Saturday night before staying at a flat in London.
The hotel is in an excellent location, 5 minute walk from Aldgate tube station and 15 minutes stroll to Tower of London. This is on the edge of 'Jack the Ripper land'. Very busy in the week but quite at weekends.
The hotel is well staffed and the rooms to modern very high standard design. Staff are very friendly to the extent of one member of staff saying hello to us when we were in the Covent Garden area later that week.
This hotel is certainly different.. This was not a stay but an experience.. 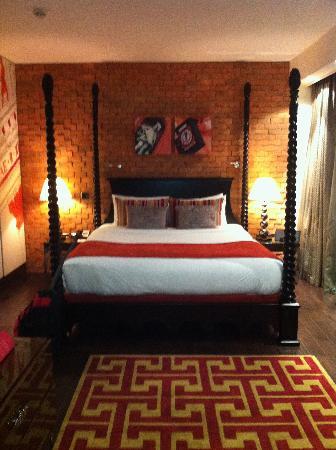 Posted by Concrete Jungle at 11:11 AM

Oh, how truly wonderful!! I would adore to experience something like this! Your clever daughter, and how exhilarating it would be to be involved in making it all come to life. xx

Gorgeous room and what a wonderful experience! Thanks so much for sharing. More interesting travels here!

forget pilfering the shampoo and soap - I'd be slipping that bed in my overnight case.
PP
pimpmybricks.wordpress.com