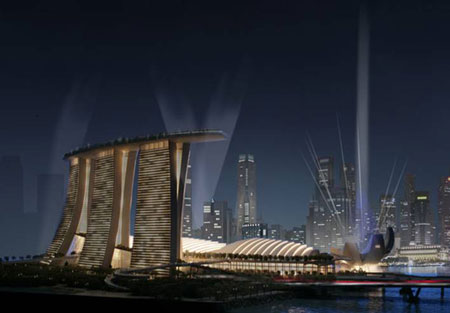 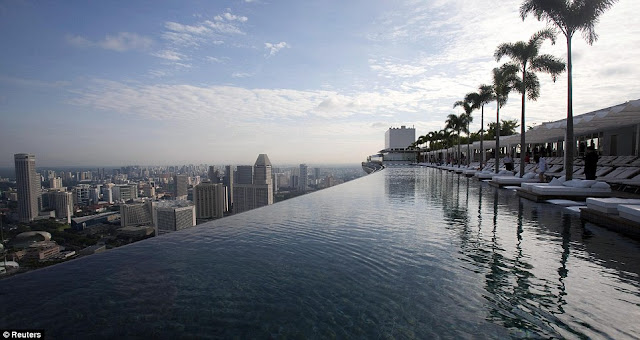 The Marina Bay Sands complex recently had a soft opening in April with a grand opening in June however, the complex still is not finished. There are theatres, floating pavilions and a museum to be completed within this awe inspiring architectural achievement. With a total cost of 5.7 billion USD one can understand why things aren't just yet complete. Hopefully the one billion estimated profit from the casinos will pay the project off as anticipated.

The brilliant Moshe Safdie is the architect behing this very grand scheme and says a simple decks of cards was his inspiration. Safdie a professor of Architecture and Urban Design at the Harvard University Graduate school of Design for many years also still has architectural offices in Toronto, Massachusetts and Jerusalem.

As a Canadian of a certain age we best know Safdie for his Habitat 67 project in Montreal. This project was his masters thesis at the tender age of 24 having graduated from McGill University in Montreal, Canada. Little prefab cubes stacked with imagination caught the world's attention at Expo 67, the World's Fair and Canada's 100th birthday.

For the Marina Sands Safdie has also designed an Art Path choosing seven installations by five artists that reflect key elements of nature light, wind and water. Though I wonder what Safdie thought when he had to pop the standard 'water feature' of Vegas inside the shopping mall portion, this time with sampans floating on it. 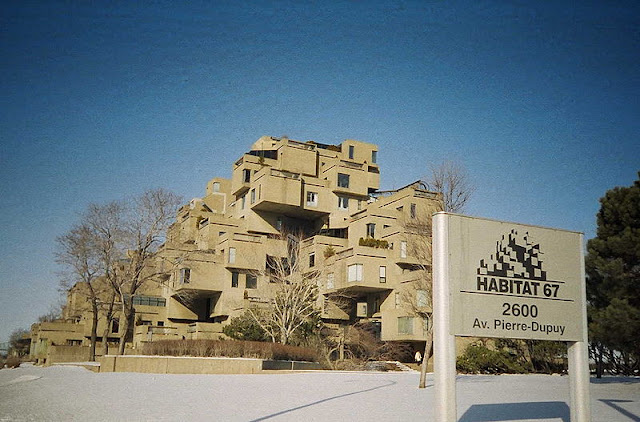 The water park atop the 57th story of the new Marina Bay Sands is really the icing on the cake.
Stretching over the three towers the cantelivered platform is an engineering marvel. Designed for building motion, settling, winds, weight etc. it is hard to actually comprehend what calculations must have taken place to afford it's construction. There is a 150 metre long pool, accommodation for up to 3900 people and their eating and drinking needs along with many species of trees and that view!

Of course if I said I must stand on the top being such a near neighbour to Singapore I would be lying. I never made it past the second deck of the Eiffel Tower although on second thought I have been on the London Eye, maybe it is possible on a perfectly calm day...we'll see!

pictures via Wickapedia the daily mail on line UK and Marina Sands
Posted by Concrete Jungle at 10:20 AM