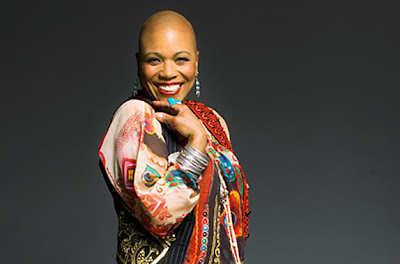 This was the treat last Friday! A concert by Deedee Bridgewater and her daughter China Moses.
Incredibly they caught a bus and spent 14 hours getting to London from Germany due to the volcanic ash! Londoners were then able to catch to two extra performances at Ronnie Scotts as the next booked in act in was caught out of the country and Deedee was stuck in town.

Now this is a Fab over Fifty woman.....heading to her 60th birthday she looks and sounds as wonderful as ever. (Geri you must go see her when she hits NY.) A Tony and Grammy award winner Deedee has just moved back to the US after 20 years in Paris. Her gorgeous darling daughter certainly caught the entertainment talent genes from her Mom and was the icing on the cake.
Posted by Concrete Jungle at 4:06 PM

Email ThisBlogThis!Share to TwitterShare to FacebookShare to Pinterest
Labels: London